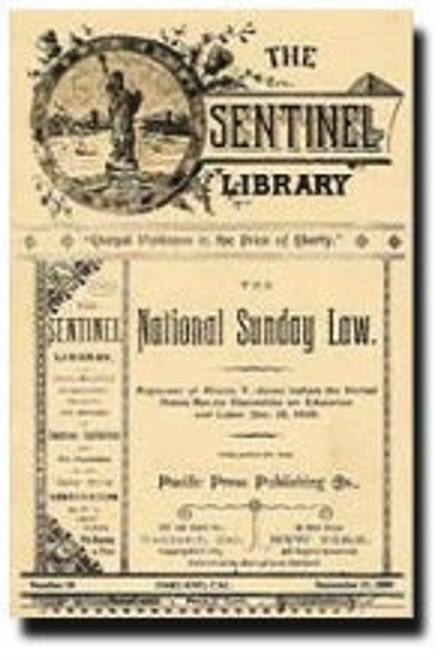 Do you feel as if your liberty of conscience is currently threatened? The American people experienced similar sentiment in 1844 when The National Sunday Bill was introduced by Senator Blair in the fiftieth congress. This Book is a result of the arguments presented by A.T Jones to The Senate Committee that he compiled in a pamphlet and published in 1888. He states, "it is not, however, exactly the argument that was made before the senate committee, as there was so many interruptions in the course of my speech that it was impossible to make a connected argument upon a single point. By these questions, etc., my argument was not only forced to take a wider range that was intended when I began to speak, but I was prevented from making the definite argument that I designed to present. I do not speak of these interruptions and counter-arguments by the way of complaint, but only to explain why this pamphlet is issued. Nevertheless it is a fact that while there were eighteen speeches before mine, occupying three hours, in all of which together there were only one hundred and eighty nine questions and counter argument by all the members of the committee who were present, I was interrupted by the chairman alone, one hundred and sixty nine times in ninety minutes, as may be seen by the official report of the hearing." (National Sunday Law Introduction) His arguments are insightful, intelligent and profound. The principles applied to the arguments are applicable for today's political and religious environment.

Law & The Sabbath, The

The Law & The Sabbath by Allen Walker

The Love Of God

This Is What I Believe by Ron Spear