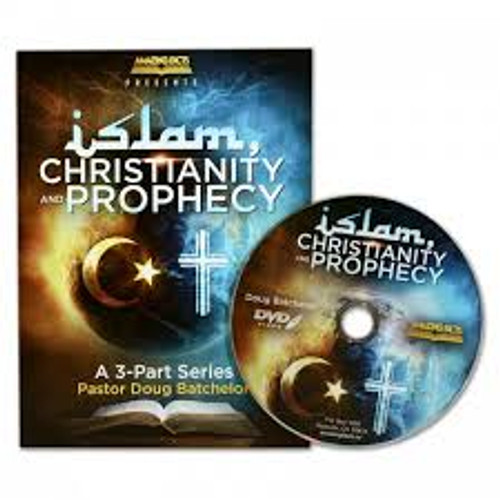 In only a few short years, Islam will suppress Christianity as the world's largest religion. What does Bible prophecy say about this surging Muslim faith - and will it have an impact on you, your family, and faith?

In this fascinating three-part series, Pastor Doug Batchelor unpacks an ancient biblical conflict that still affects our world today. Through a careful, insightful examination of Daniel chapter 11, you'll explore the historic, present, and future conflicts between the two great religions of the world - Islam and Christianity, beginning in the days of Ishmael and Isaac, to Xerxes I and Alexander the Great, to the Crusades and the Reformation, and up to the time of the end when "Michael the Prince stands up."

You'll also explore Daniel 11 through its parallel prophecies in Revelation 9 and Matthew 24, while learning the history of Islam, its controversial prophet Muhammad, and the profound differences between the Koran and the Bible. With Islam rising and having a major influence on our planet, you simply can't miss this important, bold, and inspiring message!

Postmodernism And the Decline of Christianity by Standish

(E-Book)Postmodernism and the Decline of Christianity

History of the Reformation in the Time of Calvin, Vol. 4

Listening to the Buffalo DVD

Walking in Your Love CD by Derrol Sawyer