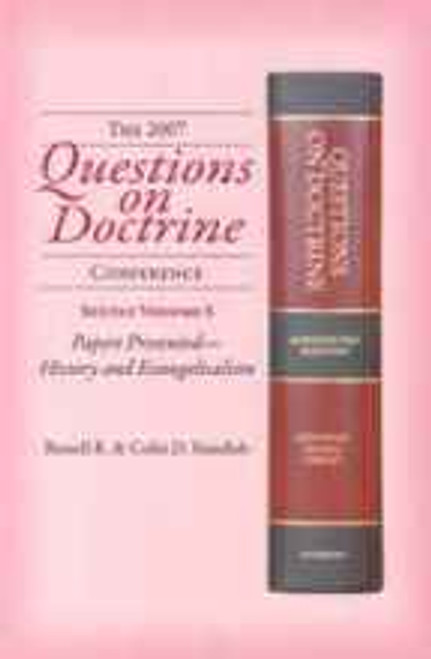 Paradoxically, the reprinting in 2003 of the most divisive book ever to receive the backing of Seventh-day Adventist leadership, Seventh-day Adventist Answer Questions on Doctrine, has opened up a new avenue which, grasped by God’s people, may lead to the completion of the shaking process in God’s church.

The 2007 Questions on Doctrine 50th Anniversary Conference has provided the first major opportunity in the fifty years to evaluate the dire effects of this book before a wide audience of Seventh-day Adventists, including many faithful brothers and sisters who have never heard of the book, much less read it.

The authors have been involved from the very beginning in the warning against the doctrinal errors of this book. Over the years many men, now dead, have risen up against the book. Names such as Andreasen and Larson in North America, Burnside and Keith in the South Pacific, and Zurcher in Europe, have stood in defense of God’s precious truth. Many not known in the world scene of Seventh-day Adventism have stood courageously with great fidelity for the pillars of the faith on every continent.

The authors, who have followed the full course of the book Questions on Doctrine for the past five decades and who presented papers at the 2007 Conference, have once more carefully documented their evaluations and critiques.

In this book (volume 5 of the six-volume Questions on Doctrine Sextet) we examine the first half of the presentations made at the 2007 Questions on Doctrine 50th Anniversary Conference. We suggest that each carefully note the conclusions which are built solidly upon the words of inspiration, differentiating these points from those conclusions which are largely derived from non-inspired sources.

This book is essential for the understanding of God’s Seventh-day Adventist church today and the unchanging commission of our church as it completes it destined purpose on earth.